Over the past several weeks I have dedicated several hours to getting the SB-200 to a point where I could apply voltage to it.  I purchased the Harbach HV board from Harbach Electronics to replace the factory HV board and the original paper caps.  With NO IDEA of the last time this amp was even turned on, nor the condition it was in when it was last operated, I made the decision to replace the board and all the components on it, as well as several other smaller mods to the amplifier.

The board install was pretty straight forward, with great directions supplied in the manual.  They were step by step directions, similar to those in the original Heathkit SB-200 manual.   Knowing that this kit was going to have 2400V flowing through it, I took my time to check each and every solder joint to make sure that they were all good and clean.  I figured the time spent during the assembly would pay off with years (if not decades) of operation of the amp later.  Looking at the wiring of the amp, I can tell that the last owner had taken similar care, which was one of the reasons I felt so comfortable working on the amplifier as well as feeling confident with what was already done during the initial amplifier build. 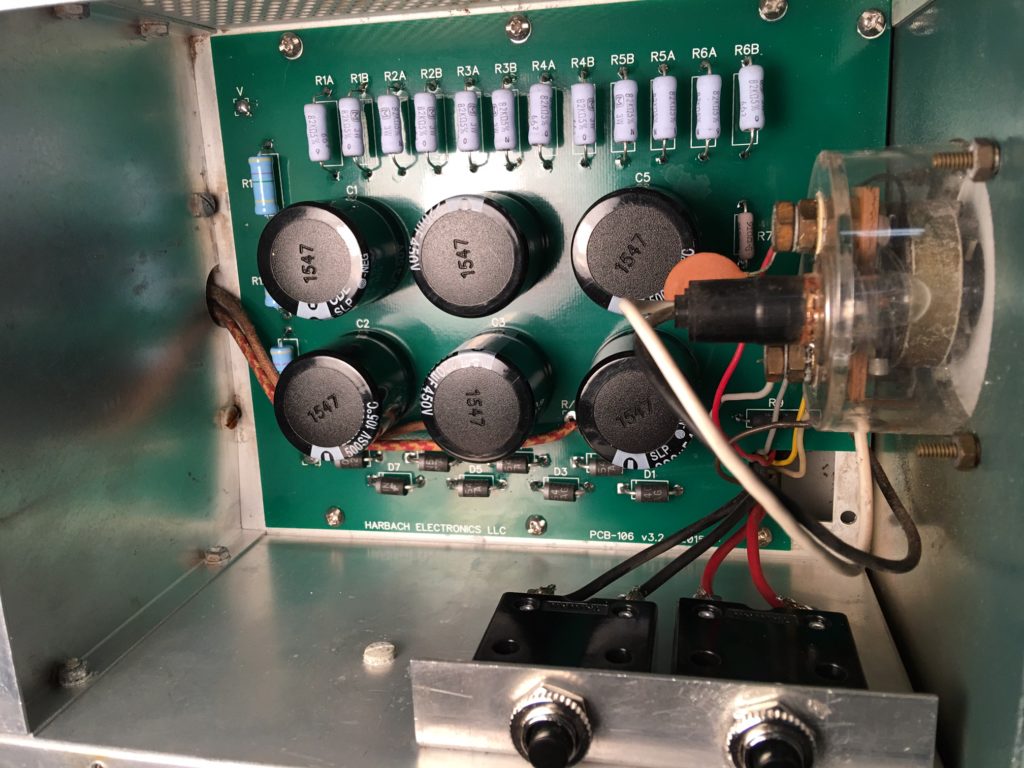 New HV board kit assembled and installed in the SB-200.

For those of you that have worked on a lot of Heathkit products, you might notice that I didn’t go with the original slotted bolts to secure the HV board.   One of the thing that this amp had a lot of was corrosion.  (You can still see it some on some of the nuts in the corner of the pic above.)  I went with stainless Philips bolts and nuts, (from the local Home Depot) reusing the star washers from the original install.   Hey.. it’s mine.  I went with what I had access to, and I figured a solid connection between the chassis and the board was paramount over using the same bolts.

At the same time that I installed the HV board, I also replaced the circuit breakers based upon the original amplifier design.  Those can be seen in the lower right of the above image.  One of the original breakers was seized up, so I knew early on I was going to replace these as well. (However, the reason for the condition of the breaker had escaped me.)  They were a simple replacement.

Beyond the HV board, I replaced the two filter electrolytic capacitors, both of them were the old paper design.  Out they came and replaced with the two as recommended from Harbach, a 2.2 uF and a 22 uF capacitor. 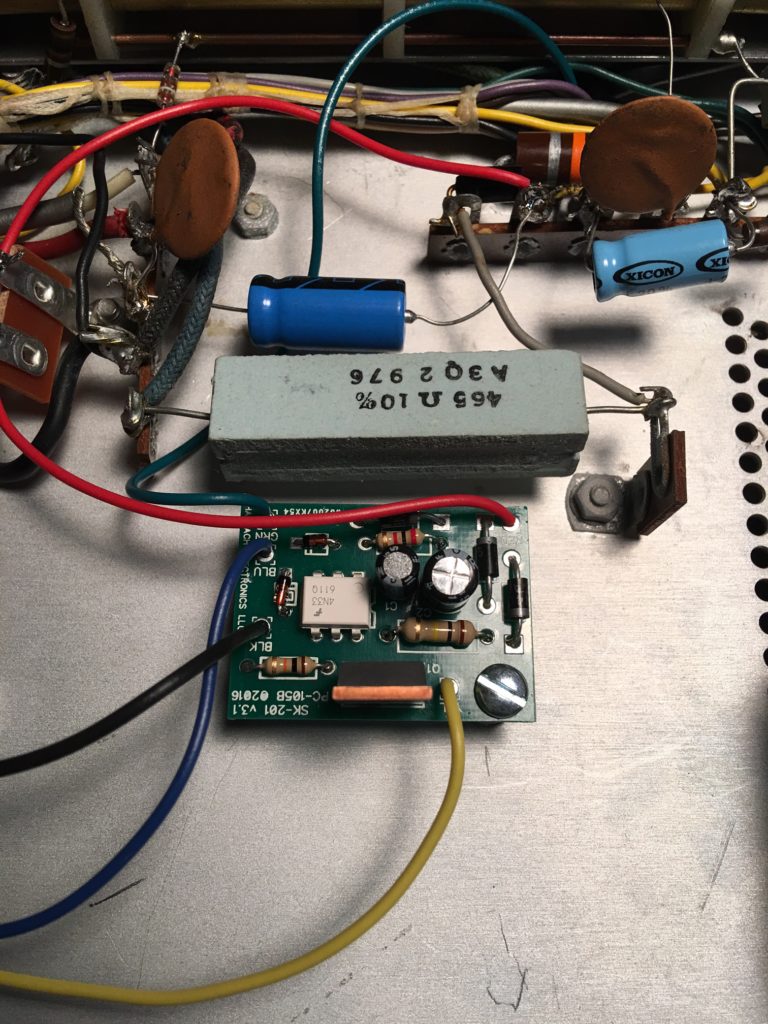 Soft-Start kit and the capacitor replacements.

I also did the SK-201 kit, which is the Soft-Key kit so you can key this amp with modern transceivers. The kit transforms the negative 120VDC key closure of the original design to approximately 0.7VDC at 1.5mA, making it very “modern radio friendly”.  This was an easy kit to build and install, only needing to drill one mounting hole in the chassis, and routing all of the wires to their designated location.  Like all of other kits from Harbach, the directions were very clear and easy to follow.

At the same time I was installing the Soft-Key kit, I assembled the Soft-Start kit that came with the HV board.  The Soft-Start was an upgrade board that takes the stress off the amp by mitigating the inrush of current when turning the amp on, by feeding the current through a set of relays before it hits the rest of the circuit.  Some have stated that when you upgrade the original (or new) HV board to larger capacitors to allow for more stable HV when operating the amp under load (aka, less voltage drop on key down) you run the risk of tripping the circuit breakers in your house when you turn the amp on,  due to the current draw of the amplifier to charge the capacitors. The Soft-Start kit looks to eliminate this issue.  However, there are mixed reviews on whether or not this mod is needed.   Some say as long as you stick with the caps that come with the new HV board, you are fine and don’t need it.  Others argue that any protections that you can add to a 50 year old amplifier design is a good thing. Since I had the kit,  I went ahead and assembled it and spent about 2 hours looking for a suitable place to install it on the underside of the chassis.   Every web page and google search showed one of two locations to mount the Soft-Start kit, but in my case both were blocked with wiring.   The primary location was blocked with the blue high voltage wire that was coming from the HV board.  In 99% of the images of other builds, there was enough slack in their wiring to move it out of the way to then install the Soft-Start board. In my case, I didn’t have any slack to move the wire around.   This lack of slack and contemplation over the placement of this kit for so long must have been karma, as I while I was not able to find a suitable location, I was rewarded with finding a 5mm exposed section of the HV wire, where an errant soldering iron melted away the wiring insulation!  I could tell that this was an “old” injury based upon the location and condition of the wire.  (And maybe the reason for that fried circuit breaker?) However, if I had not spent all this time looking for a place to mount the Soft-Start board, I would have never seen this, and missed a real potential point of failure.   Some heat shrink tubing,  a hair dryer and 10 minutes of time later, the fix was good to go. (below) 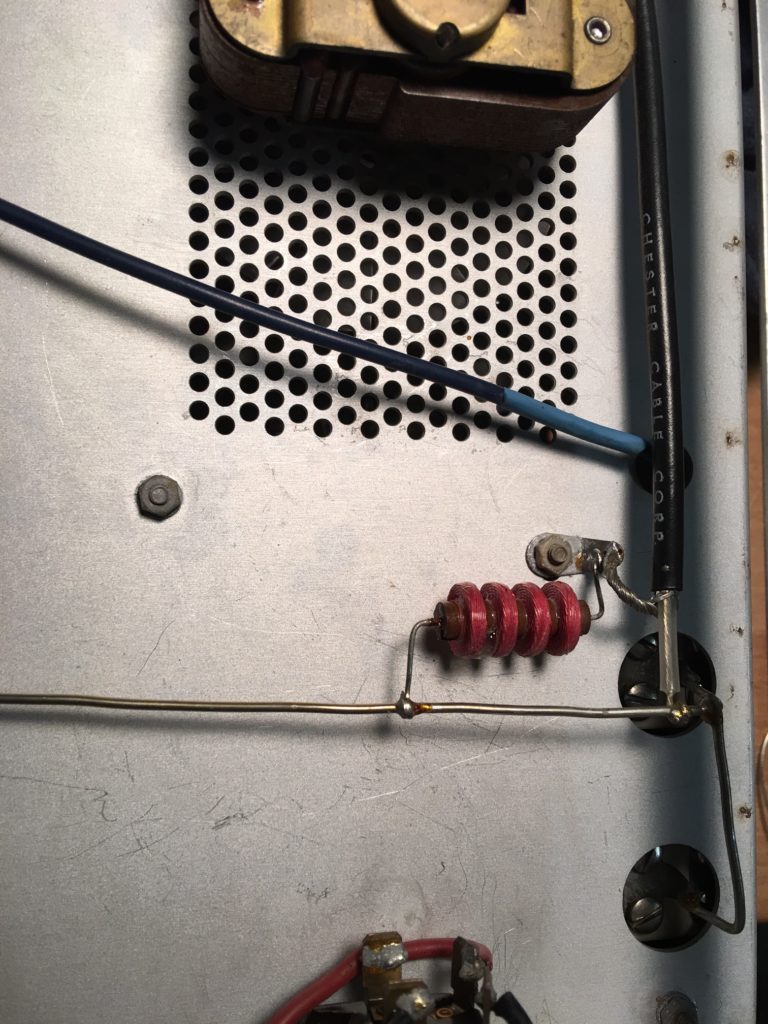 Check everything when looking to restore unknown condition ‘barn finds’!

So, I still have the Soft-Start board, however, I have not installed it.  I will see how the amp fares without it for now.  I can always install it later.

I didn’t replace the relay or the fan, both common replacements in this amplifier.  Both looked good.  The relay was not pitted and not bad when compared to others I had seen in other restoration projects.  The fan spun easy (even with compressed air moving it) and the fan assembly also looked good from the underside of the chassis.  Seeing that it was in good shape, I figured I didn’t need to replace it.  Combined with the notion that I was already planning on mounting a smaller muffin fan on top of the case to draw/suck the hot air out of the amp.  I imagine I will eventually have the 120V muffin fan wired right into the amp, once I get the location and wiring laid out so I can still open the case with the fan mounted, etc.  Or, maybe I mount it under the amp pushing air into the chassis under the tubes… again.. I have to noodle more about this one.  Push air in, or draw air out. hummm…

Time to make the donuts!

Or in my case, start applying voltage to the amplifier for testing!
When I started in on this project I made a promise to myself that I would NOT work on the amp if I was tired, or not interested /focused on what I was doing at the moment.  I have this internal drive that will push me to finish projects or physical activities when the desire to complete them has long passed.  More of a “put your head down and march on” mentality.  Well….. it is one thing to have that attitude when you are looking at doing 90 burpees, or grinding out another 12 miles on a hike or run. However, when working with something that can, as the manual states.. “WORKING WITH HIGH VOLTAGE CAN BE LETHAL!  MISTAKES CAN KILL YOU..” I tend to lean towards self preservation, and fight the desire to push on.   Rather, put the project aside and work on it another day.  This was me last night.  I had run my final inspection, my final cleaning, did the resistance checks as required in the Heathkit manual and everything looked good.  I wanted to test it, but I was quite tired.  Tomorrow would be the day to see if the time, energy and $ that I had put into this project was going to result into something positive.  This barn find was untested.  Hell, I didn’t even know if the transformer was going to work.  I could flip the switch and end up with nothing.  However, tomorrow would have to be the day to find out.

As soon as I got home, I changed, and went right to the amplifier.
I took off the metal RF screen that protects ME from the innards of the amplifier so I could get a better look at the tubes as well as the HV board.  I wanted a clear view of the various parts of the amp as I would be applying voltage to the amp and the tubes via a variac, bringing up the voltage a few volts at time over several minutes.  All the while keeping my hands OUT of the area.  However, how would I know if the tubes were any good?
What should I be doing with them since they have been sitting so long?

Again, I have NO idea when the last time these tubes saw voltage.   I pulled the tubes out of the chassis, and sprayed the anode clips with contact cleaner, making sure I protected other areas of the amplifier when I did this.
Searching the internet I found this procedure as far as testing out the tubes and the amp.

Thanks Lou!
This would be process that I would follow tonight, over the course of a few hours, bringing up the voltage slowly (and pausing every 10v or so for 10 – 15 min), all the while, checking on what I saw, smelled and heard.

I set the varic to Zero volts and turned it on, then I reached over and I would lying if I said I didn’t have some hesitation- and flipped the large black power switch on the SB-200.

I slowly started turning the variac stopping every 5 volts for about 10 minutes. 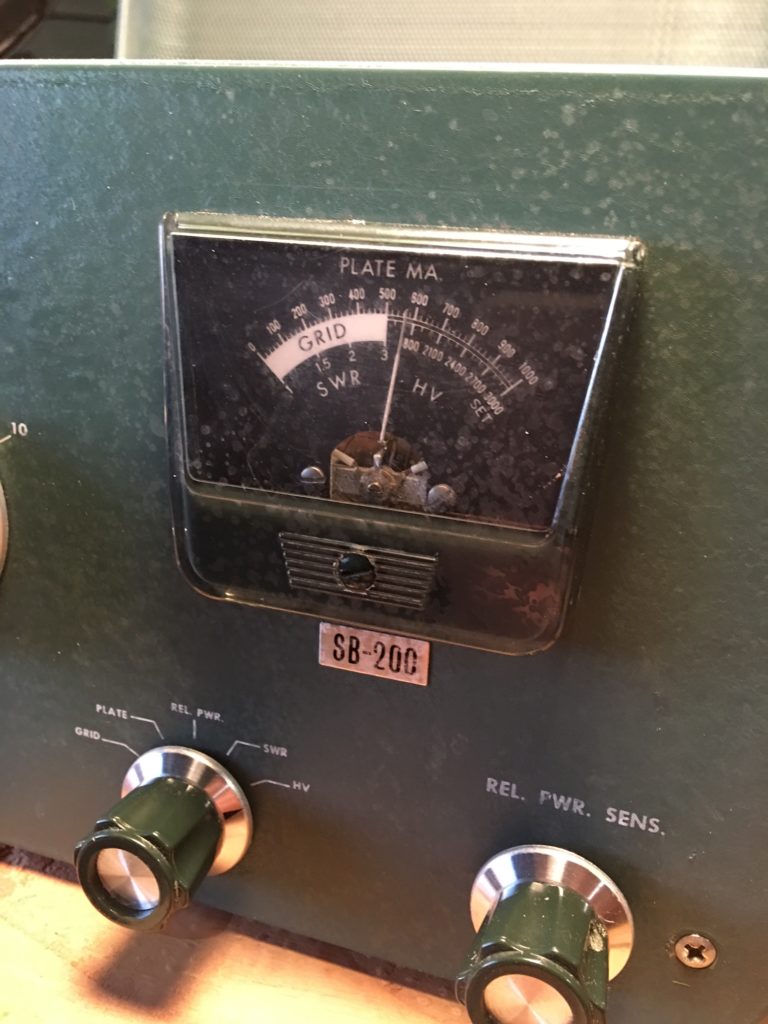 1700V on the plate! Testing continues. (Yes, I know the meter glass as well as the amp metal face is spotted, anyone have a good way to clean that?)

Following Lou’s directions I was switching back to screen and grid to see if I had any deflection of the meter as I increased voltage on the amp.  I didn’t.  Zero meter movement. Cool!

At 110V I was seeing about 2100V on the meter.  The fan was spinning at the fastest rate at this point, and was very quiet.  The spinning was balanced as I didn’t hear any squeaking or vibrations from the fan either.  I guess I don’t need to replace this one.  🙂 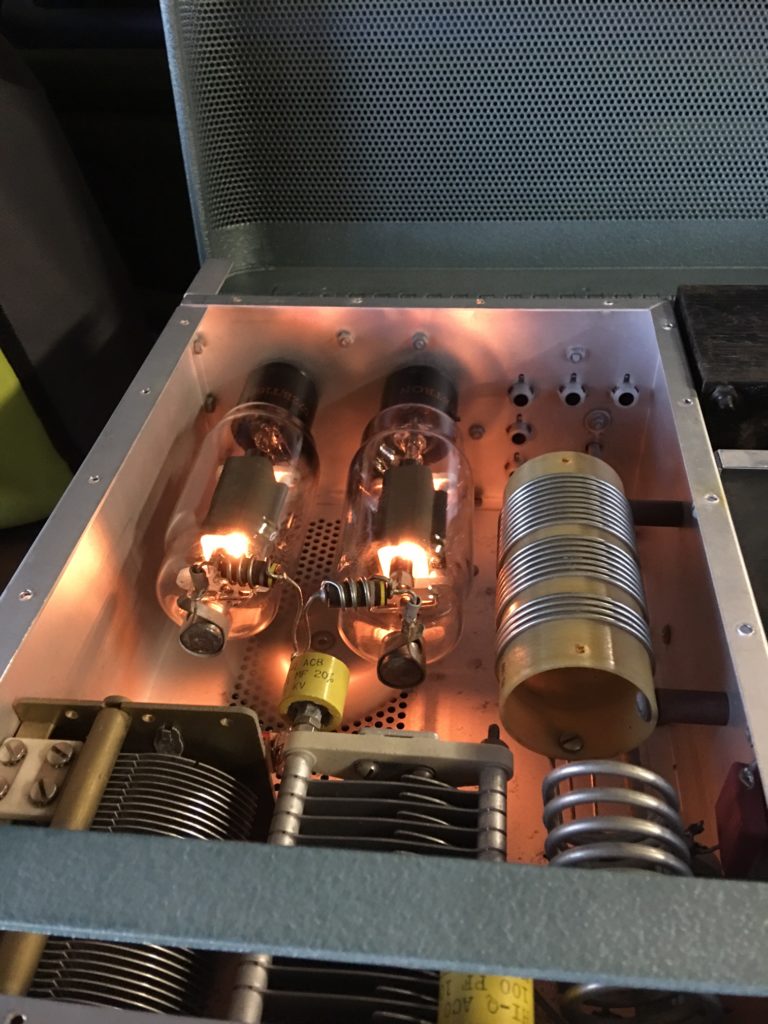 Tubes are glowing – High Voltage is flowing.. and I need to keep my fingers out of there!

The next steps will be to run the variac test again (well, several times).  Then I need to do the following:

So far so good – excited to start on Part III.