This year for Field Day I took a different approach then in years past, I hosted several hams who are showing a desire and promise in radio contesting to the shack for some instruction and operating time here in the valley.   Typically, for Field Day we would head to the hills to avoid the summer heat.  June in Phoenix can get brutal.  Up in the mountains, it can still get hot (mid 90’s) but nothing like the 105-115 degrees that we could see in the valley.  However, one of the requirements of my new shack was that I could hold three stations in it comfortably and have it’s own AC unit. Due to logistics, fire restrictions, the desire to not stay up all night working the radio, then tearing down and driving 3 hours to get home from the rim as well as a host of other reasons, I invited a few folks over for a smaller private affair.

The goal was to invite some folks who have shown an interest in radio contesting, were willing to work, and most importantly, wanted to learn.  If folks want to learn, I am more than willing to help, and offer what knowledge I have to help make them better operators, which in turn, allows them to Elmer others and pay it forward.. and so on.. and so on. As I progress in my radio career/hobby/experience I find that there is always room for another Elmer.  Whether it be with circuit design, or tower raising, or HF operations, there is always someone out there who has more knowledge that you.  If they are willing to share it in a way that make sense to you.. even better!   So, for me, this year, I was going to step back and not be the “big gun” on the radio, letting the other members of the group work the bands with the greatest chances of QSOs, (40/20m) and I would hang back and instruct / pick up points on the lesser bands.

I found a group of about 6 hams who were willing to take part in my wild experiment and since we all get along together well, it was a good fit.

We tossed around the idea of running either an Echo (E) class station, or just go easy and stick with (D) Delta class.  With Echo, we would have to run on emergency power the whole time for the radios, while that was possible, however I also wanted to show everyone what EME was all about – and I don’t have the battery power needed to keep the Larcan amplifier up and running.   Yes, we could have gone generator power – but they are loud and I didn’t want one running all night long.  The neighbors think I am crazy already with all the wires and poles sticking up in the air. I didn’t need to be “that guy” who left his damn generator running all night long.

We settled on running Delta class, knowing we could not work other Delta stations for credit as part of the rules.  However, we added a twist, we wanted to have multiple transmitters.  Four Delta (4D) using the special event call W7P is what we ended up doing.  I dare say we might have been the ONLY 4D station operating over FD. 😉

Having Field Day at the home shack did provide some benefits.

The CW station was the only station not in the shack.  Dave, AC7FF, wanted a quieter space so he could focus on CW.  We put him out in the RV, with a short run of coax to the GAP Titan vertical, which he has exclusive access to for 80-10m during FD. 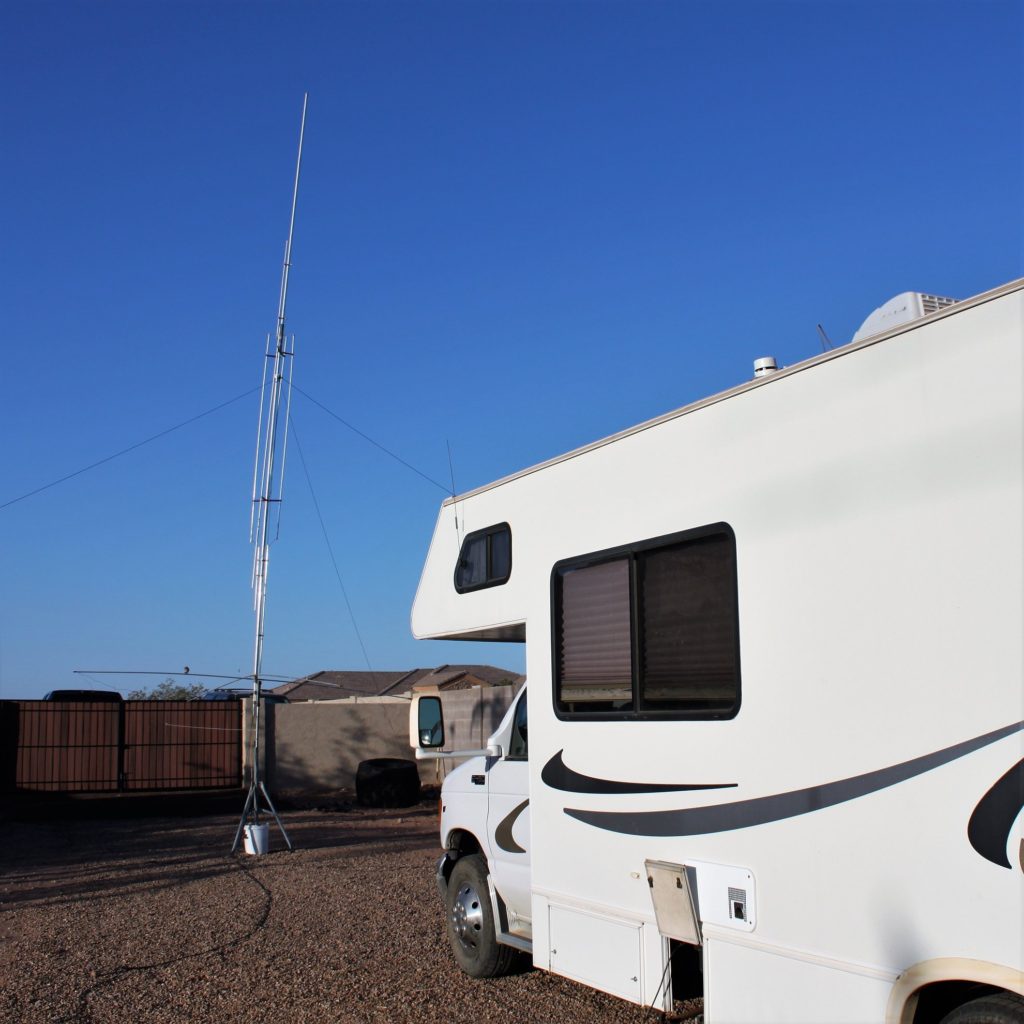 The GAP Titan setup for the CW station. The Titan was a Yuma hamfest purchase and worked well. We discovered several things about it.. namely, the previous owner had installed several parts incorrectly.

Dave did have AC in the RV, but it isn’t the best.  With it being 108 degrees outside, it was probably mid 90’s in the RV.  So Dave got to sweat to the tones of CW.  Ham radio and a workout,  #winning! 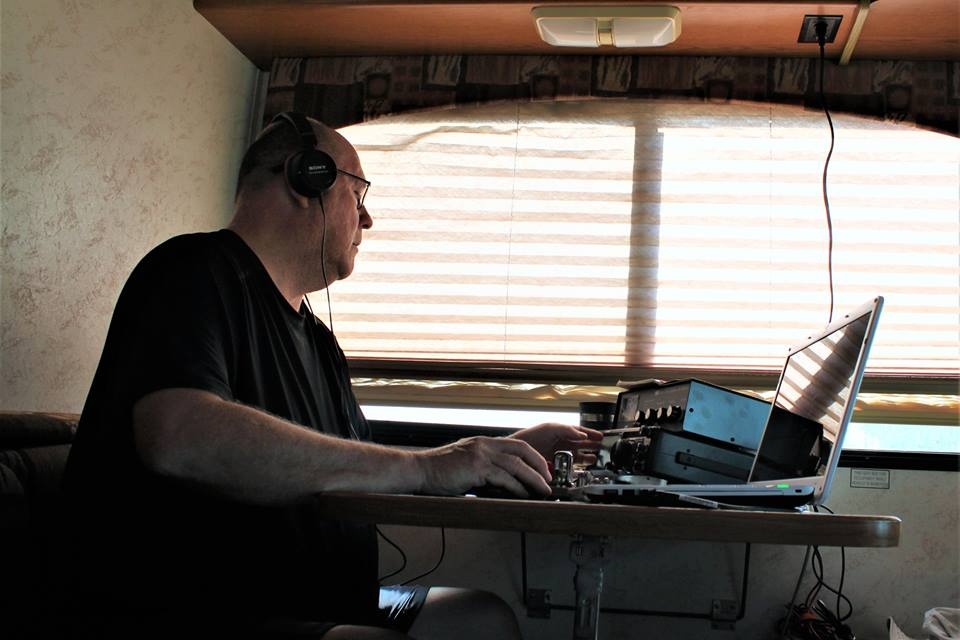 Running the bands on CW, using the keyer function while hunting and pouncing, avoiding the Delta stations as he could.

Inside the shack, we had room for three stations.

Christi, KG7NAD, knowing that we would be on commercial power, made no concessions, and grabbed everything from her shack to bring to her operating station.  (No, the recliner is mine.. already in the shack ha!) 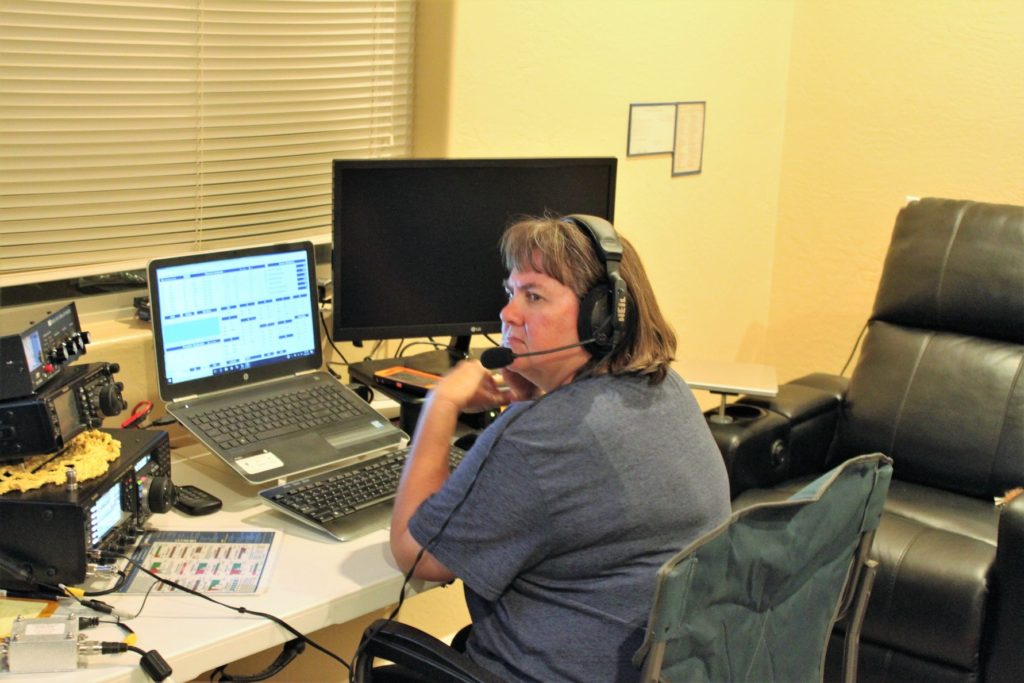 Christi was the primary on 20m for the event.  She had access to the TH-3jr 20/15/10m beam that we put up on some military mast sections. Using the armstrong method of tuning, she was able to focus on the large populations in the Oregon/ California areas as well as the populations in Texas, Ohio and Florida.  Never really broke into New England, conditions were just not there. 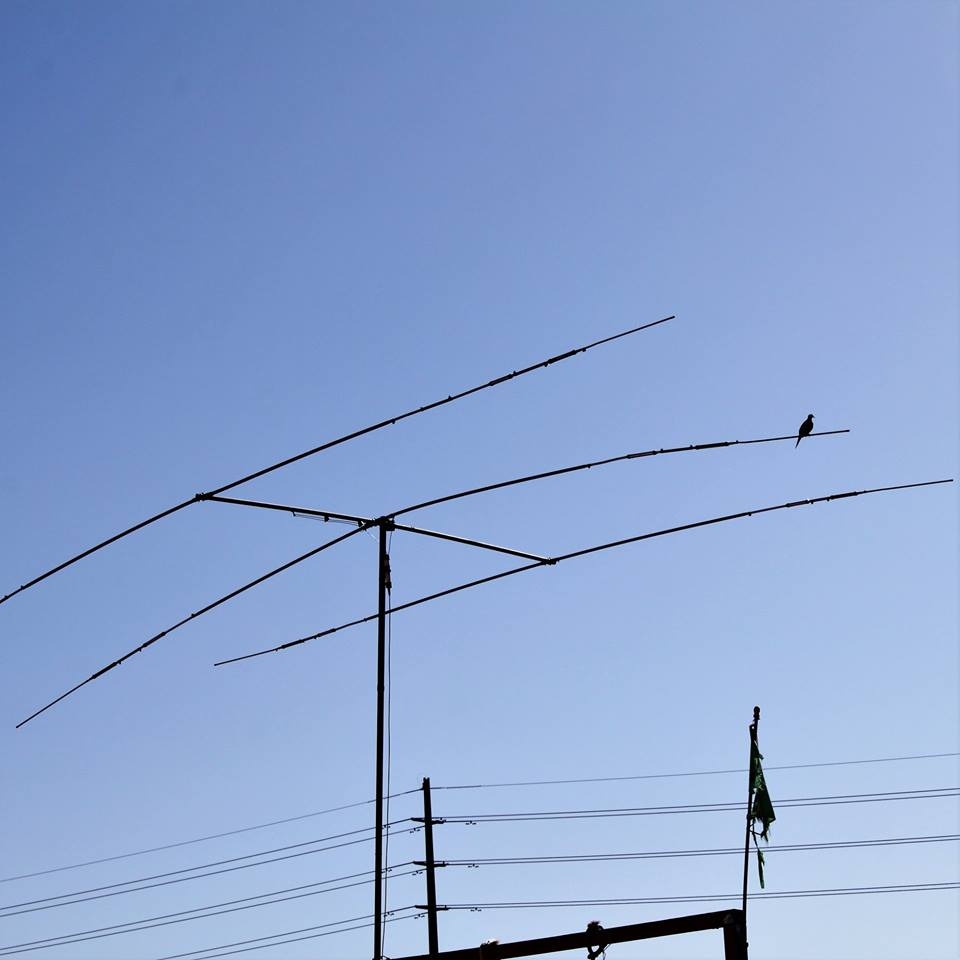 The TH3-jr.. which needs some new parts after the crash at Winter Field Day 2018.

Andy, KG7KWG, operated his FT450D (now sold), and was the 40m operator.  Andy operated off an OCF dipole in an inverted V arrangement.  Broadside N/S.   It worked OK (not high enough) for 40m, but was NOT that great on 80m, which was a great learning experience for him and myself. 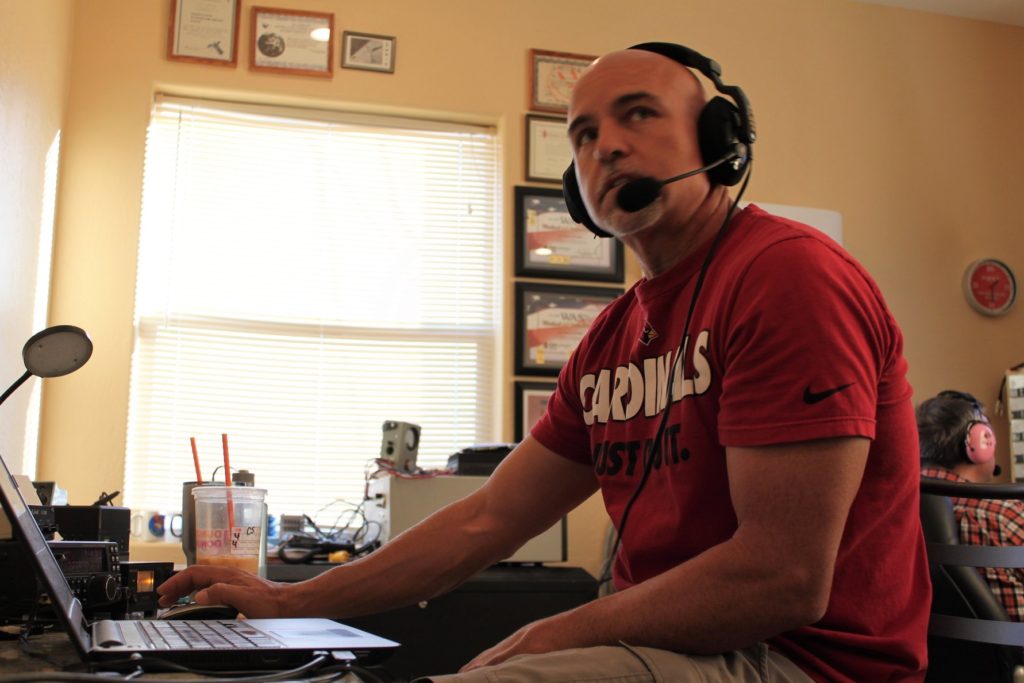 Troy, K7TJK, came by after work, having missed the last several Field Days due to work schedule – and snagged a few satellite contacts as well as covered the 80M station overnight.  Troy was taking all the pictures, so none of him, but he did get a nice one of his operating position for the satellites (and the OCF antenna that Andy was using). 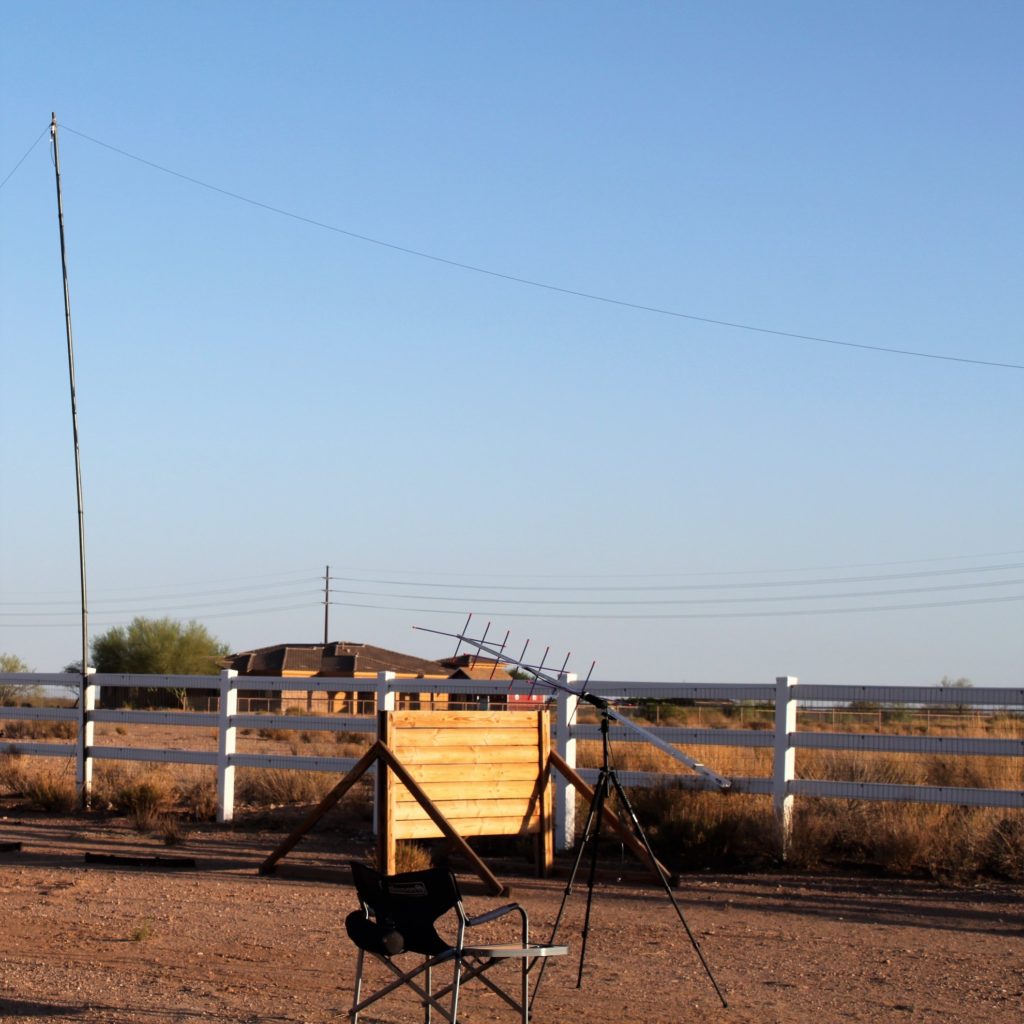 Troy’s operating position for the satellite qsos, next to one of my Spartan training walls and the OCF dipole antenna. 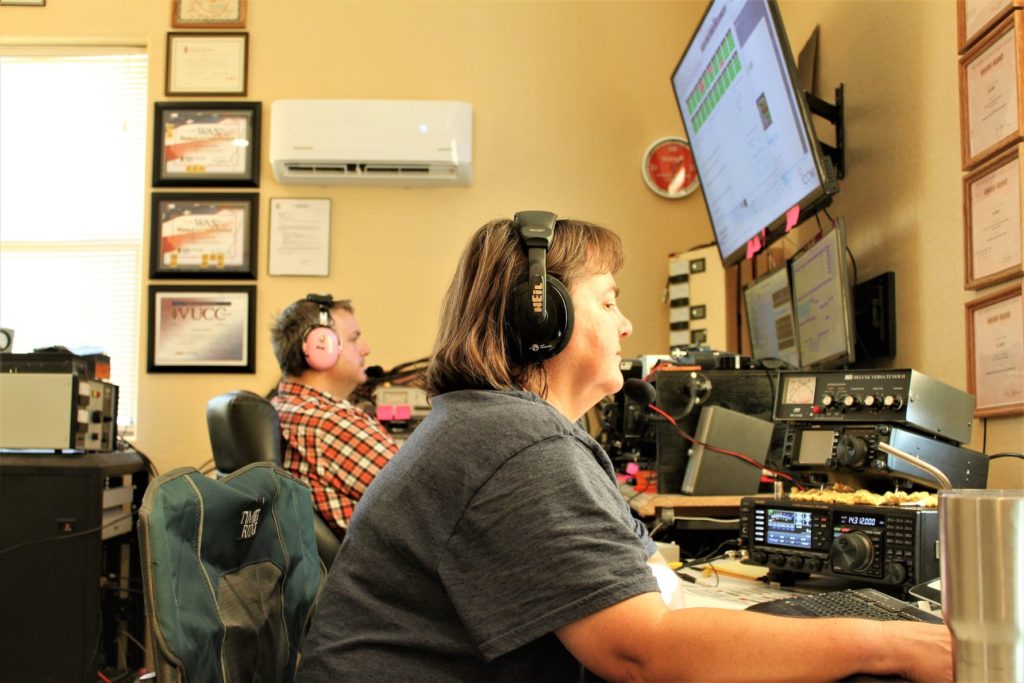 Some of the team hard at work on the bands.

We had a good time operating together this year and learned quite a bit.  Band conditions on Saturday were not good, so I spent time talking about filters, DNR, DNF, notch, etc. We worked who we could, but it was difficult to hold a pile up due to conditions.

Andy discovered several limitations of his Yaesu FT-450D, which is why he promptly sold it.  It is a GREAT use everyday, rag chew radio.  The 450 isn’t a great digital radio, or contest radio, due to how the options are laid out in the interface.  Not to even get into deeper characteristics of receiver sensitivity and other specs that the 450 is lacking on.  It served him well, but he just outgrew it.  YES!  Progress! He also discovered that napping by the pool is very relaxing.

Christi learned a ton on radio propagation and the relation to the time of the day, as well as a pile of features on her radio, and how to overcome small annoying issues that were popping up when logging.

Troy worked like crazy on 80m, on what seemed to be a dead band.  Man we needed a voice keyer there! Tremendous effort – and snagged qsos on 40 and the satellites.

Dave finally.. finally.. started getting comfortable using the CW keyer in the 991 which made hunting and pouncing a lot easier as he could just work the keyer and would not have to constantly send via the paddles for the duration of the event.  His dump cake that he supplied was also a great hit!  Dave, the cherry berry one is better than the peach one FYI..  😉  Thanks for bringing them, and thanks for the effort on CW.

Vicki made some awesome meals and was very tolerant to our activities over the 24 hours, pulling doggie duty the whole time. (Thanks!)

Not sure what the plan for FD 2019 will be.  If we operate in the valley again, we will surely go “Echo” class, or we might go back up on the rim, or maybe even operate as a mobile station in the RV.  It will be hard to pass up those catered meals however..

Time will tell.  Thanks all for a great time!