After the success with the first attempt with the Ethernet Vertical antenna, I knew I wanted to improve upon the design to improve how the antenna would function.  As a proof of concept, rapid deployment, emergency HF antenna, I proved it could be done and I could work stations.  However, I knew I could improve it with a few hours of time.  First off I knew I could improve the SWR on 40 and 20 and 10 with some minor adjustments and removing some material that was just floating in the bundle of wires.   I separated out the wires (“You gotta keep ’em separated”) (Bonus points awarded to those that comment with the artist) the antenna would operate better as there would be less interaction between the different vertical radiators of the antenna.  So, I broke out the networking stripper tool and stated to work to strip off the sheath, and then un-bundle all of the wires. 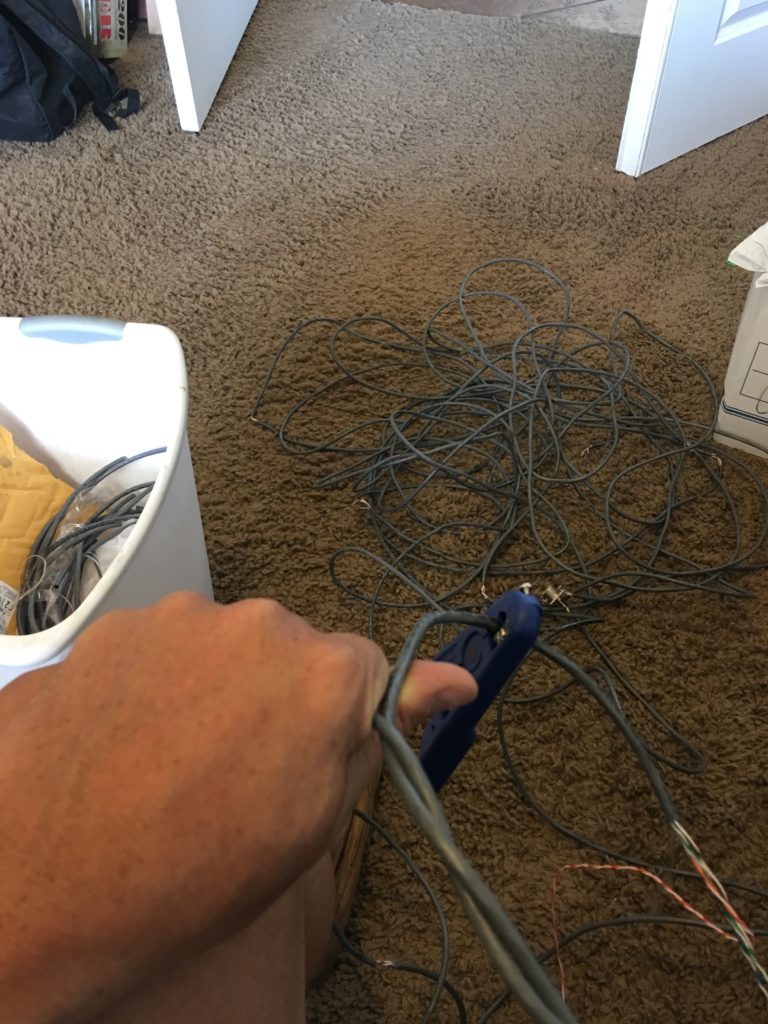 Working on my grip strength stripping the sheath off of these 33′ long runs of wires.

If the wires were stranded and not solid, it would have gone a lot faster, as you had to pay a lot of attention to kinks in the wire as you pulled it back and forth and coiled it up.

However, the end result was worth it.  All the extra wire was removed, and I was able to separate out the single and pairs of wire that I was using for each band, for the vertical radiator as well as the two sets of radials. 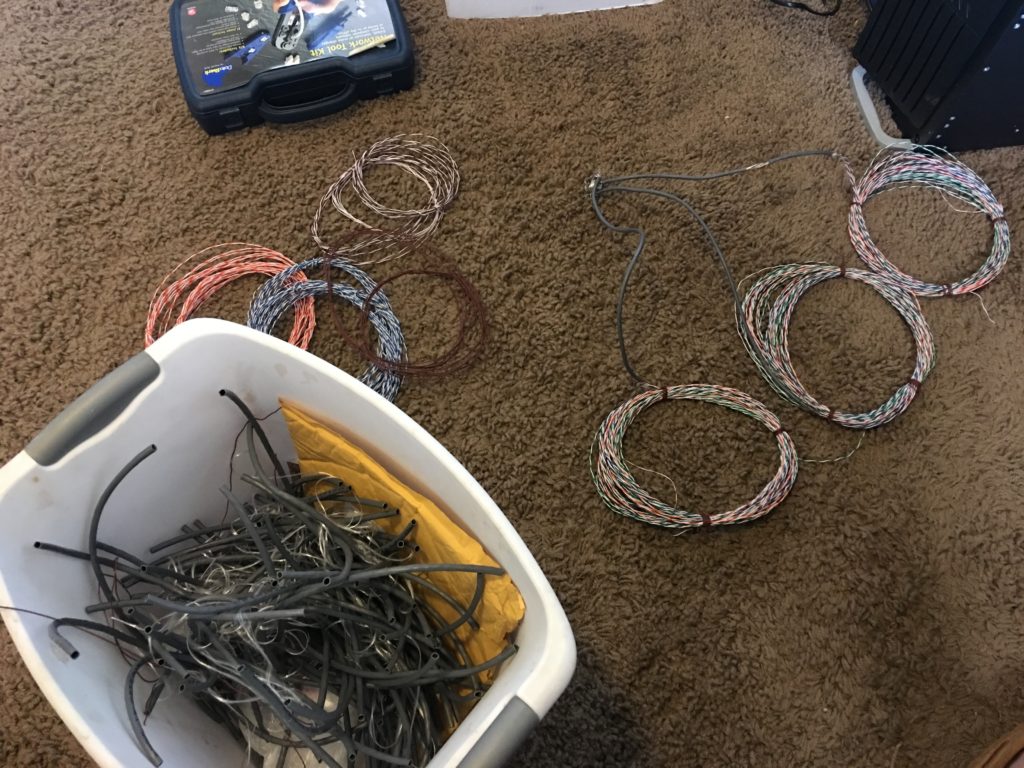 A trash bucket full of discarded CAT6 cable sheathing and the excess wire removed from the antenna.

With the latest additions done, it was ready to go back to the park and set it up again for round two of testing.

Upon arriving at the park (Desert Mt. Park in Queen Creek), I quickly remeasured each radiator as well the radials for any last minute adjustments, then strung up the antenna, just taping the radiators to the jackite pole using electrical tape.

After a few up a downs of the Jackite pole with Dave, AC7FF – I determined that I had cut short 20m, and needed to add back about 8″ of wire.  An easy fix for this portable operation, but a long term solution would be a solder job to attach the extra wire, or a crimp connector.  For this outing, we just twisted the wire together and called it good. 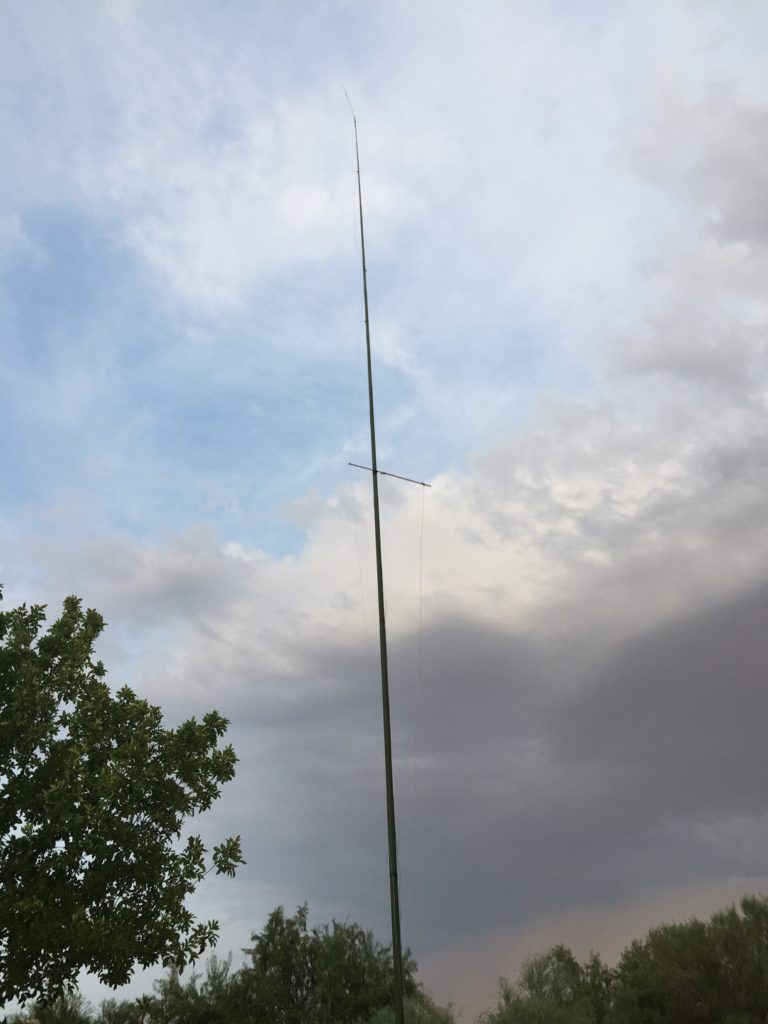 Extra wooded dowel at the top and the wooden dowel stand off arm for the 20m radiator.

I ran the 40m radiator the full length of the jackite pole, and then added a 3′  wooden dowel rod to get the height we needed for 40m.  For 20m, I added a stand off to keep the radiator away from the other bands.   30/17/10m were all taped to the jackite pole on opposite angles to each other. 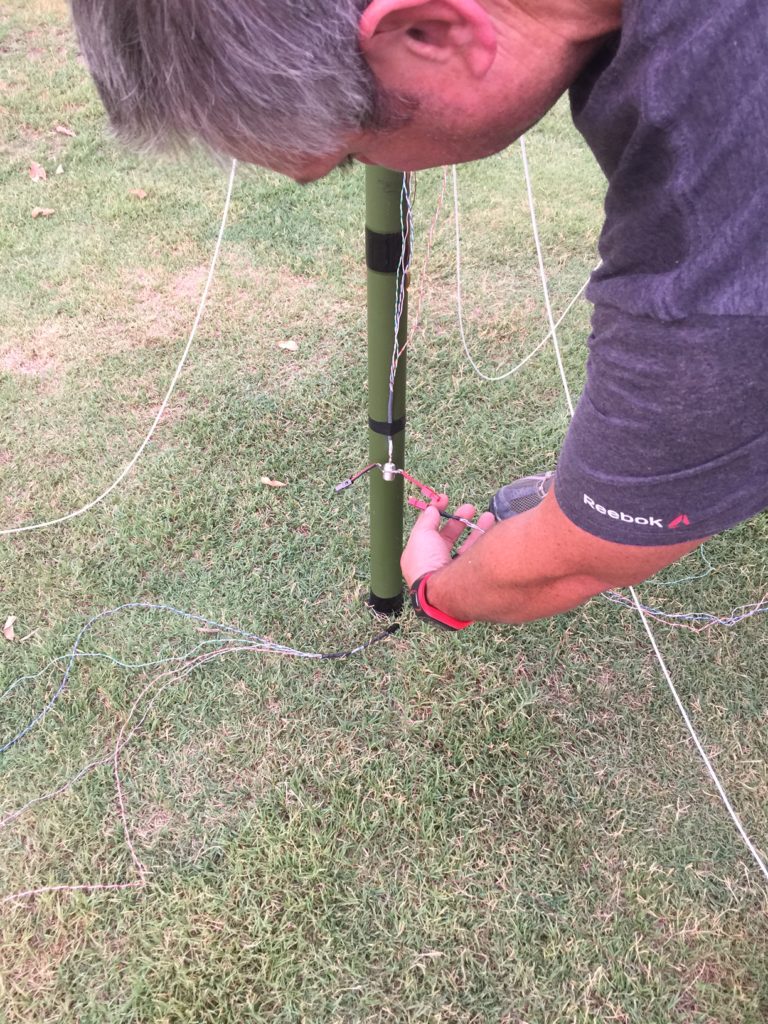 A close up of the connections of the ethernet cable wire radials laid out on the ground and the connection to the center conductor.

I upgraded the base radial connections and added power pole connectors to allow for easy storage of the entire antenna.

Talking with KF7E, our resident solar weather expert on the local repeater that evening,  20m was experiencing a 10-15 Db attenuation due to solar conditions.. A quote from Jim:

“Don’t expect much tonight on 20- not the best night to test a new antenna..”
However – I made contacts all over the county that night by calling CQ on 20m.  I think the lack of stations on the air made my lower power signal readable, and being well south, I was not affected by the aurora that the northern part of the country was facing.  Twenty meters was quiet, but at the same time I was hearing east coast stations as well as west coast.
I ended up working Iowa, Oregon, Washington, and a few in Texas before I had to shut it down due to dust and thunderstorms. Using the same radio as last week, the Yaesu FT-7, signals both ways were not super strong, but were workable.   I even worked a few stations who were also only running 20w, and even a /QRP SSB station.  Most replied with my first CQ and I never had to repeat any information due to conditions dropping out.  Everyone I mentioned the antenna to was intrigued – wanting to know more about this $19 multi-band vertical.  I chatted with each one for quite a while until the dust storm forced me to go QRT.

For my east coast and overseas readers, here in this part of Arizona, we get wicked dust storms, which are almost always followed by embedded lightning and tons of rain.   As I was working stations, I could hear the lightning crashes in the radio receiver.  Looking at the weather radar app on my phone, I could see the storm was still 30 – 40 miles away.  However, the approaching dust cloud was a bit closer. 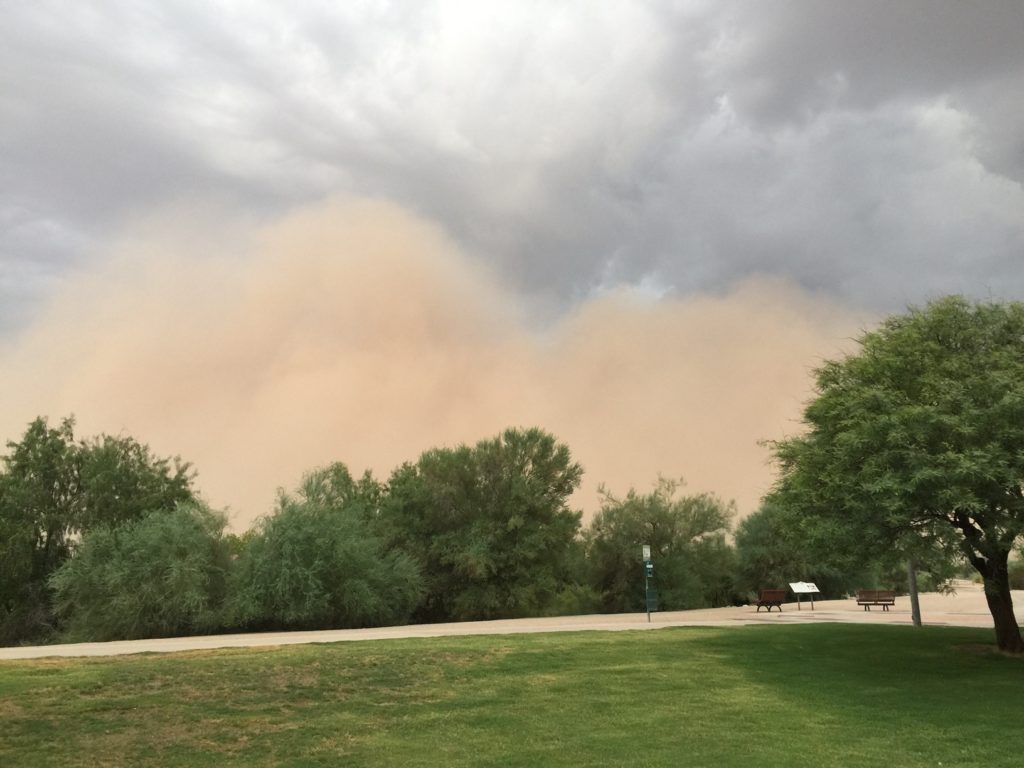 Yep – another dust storm rolling in!

When Troy, K7TJK snapped these pics, (this one is great Troy!) the storm was about 20 minutes away.  It was time to tear everything all down and get it into the truck before the dust cloud rolled in.   I made it with about 2 minutes to spare before the first wave of the dust storm hit.  Yes.. it is just like what you see in the picture, a massive cloud of dust, usually moving with 20-30 MPH winds.  That small fine gritty sand gets in everything and makes a heck of a mess.. not something you want to subject your radio gear to.  I quickly packed up and headed for home as I knew we were done operating.  The lightning and sheets of rain soon followed.  I would have loved to have operated a bit longer, but I think I proved my point.  $19 worth of wire, 3-4 hours of time and you have a great effective antenna.  Radio doesn’t have to super expensive, and when it is cheap – it is a lot more fun!

Hope to work you on the bands!