One headset to hear them all!

One of the things that I have been researching for the shack is the ability to hear multiple radios at one time in one set of headphones.

Now, I know some of you are thinking.. ‘Why in the world would you want to do that? I have a hard enough time just keeping one station straight.’

Well, the major reason for doing this is contesting.   As folks evolve in contesting from a single transmitter with one antenna to a single transmitter with multiple antennas – they soon realize that if they had a second transmitter, they could operate both radios at the same time on different bands, or digital on one and voice on the other, which is almost like going from a Yugo to a Mustang.   Both will work, just one will get you and you score a lot higher- faster!

This evolutionary upgrade from SO1R (single operator 1 radio) to SO2R (single operator 2 radio) also brings a new set of challenges, such as routing audio from the various radios to one headset so you can listen to both radios at the same time, and then of course your microphone management so you are transmitting on the correct radio at the correct time.

Those of you who have already gone down this road will say.. “Jay, they already make SO2R boxes / software to do what you want.”

To that I will say, Yeah they do.. however, they have issues.

One of the simplest setups I have seen for a SO2R is from Stefan,  DL1AIO.

Even that, as simple as the design is, can be daunting for the new contester.  Other interfaces rely on interface boxes and software, and can limit how you operate.  I am all for having the computer a part of the modern shack.  Heck, I have at least 4 of them going right now.  However, I do not like having to have computers up and running with specific software in order for me to get on the air and enjoy the hobby.  Sometimes in my book, older, simpler is more enjoyable and a heck of a lot easier to tell someone how to use.

So, I have been digging around a while.  Found plenty of websites from the fancy W4KAN interface to that of the W2IHY Interface boxes as well as DIY / homebrew solutions.  I wanted something that I can causally switch between radios, and even switch between audio sources in the left and right ears, so I could listen to one radio in my right ear, another in my left, or either one in both ears.  Yeah, why not Jay, let’s make it super complicated.  😉

I was perusing the local Goodwill store that just opened up in the next town over from me, a local haven for electronic gear;  5v-18v wall warts, cables and misc electronics that can be had for cheap.  If you do not know about Goodwill, I urge you to read this to understand the massive amount of good they do for individuals with disabilities.  At the same time, if you believe that fake news about ‘evil CEOs’ and how much they make at Goodwill – read this as well.   As I was wandering the isles, I tuned the corner from the end cap of the various ethernet cables and 120V power cables – and low and behold.. there it was. 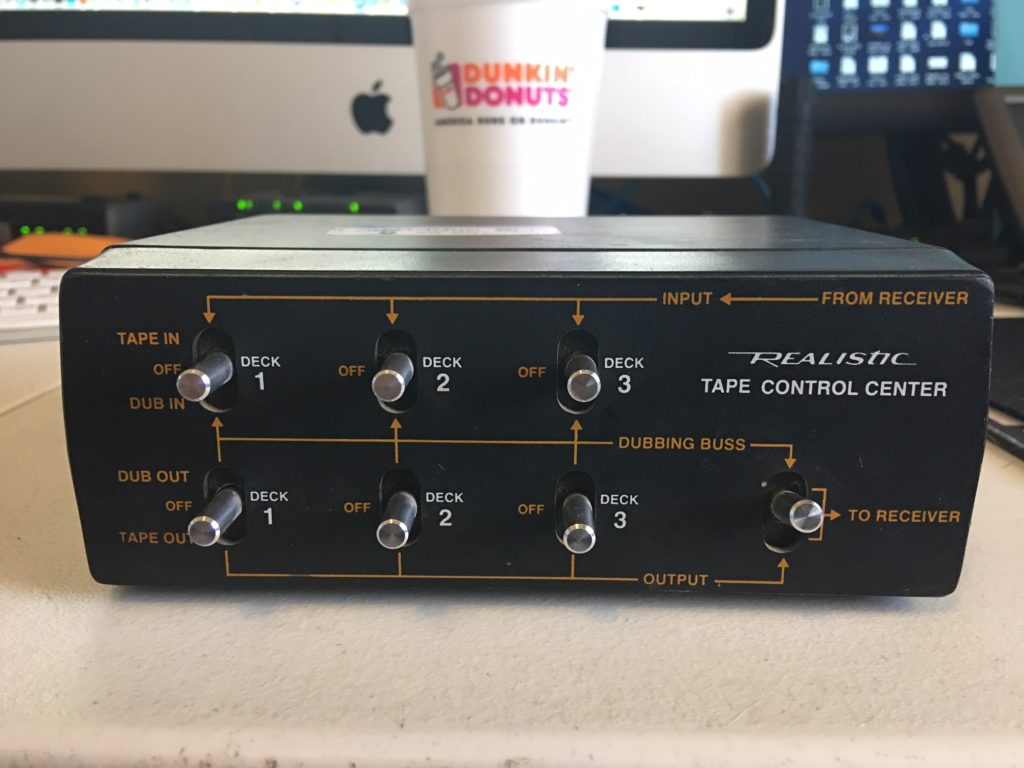 This ham ‘Runs on Dunkin”

This interface, designed back in the day for use with multiple tape decks to dub audio sources provides a slew of RCA inputs and outputs, which allows for multiple scenarios of having one radio in one ear another in the other, or both in both ears, as well as individual selection options via the switching matrix.    From my initial observations, I have close 9 different combinations that I can port the audio to the headset.  All I needed to do is come up with several 3.5mm stereo audio cables that are split to L and R (white and red) RCA connections. (Except not 10′ long!)  The local hamfest had these cables – 24″ long at a buck each.

SCHWEET!  (That is “sweet” in New England speak – pronounced correctly as ‘shaa-wheat’)

Once I saw it, I wasn’t going to put it back down on the shelf.  I knew I wanted it and it would do exactly what I wanted it to do –  especially at the low low price of $4.99.     While in the store, I did the “rattle test” shaking it vigorously up next to my ear. Nothing sounded loose – all the screws were there – the switches were firm and not loose – the case was solid – and all the external jacks looked good. 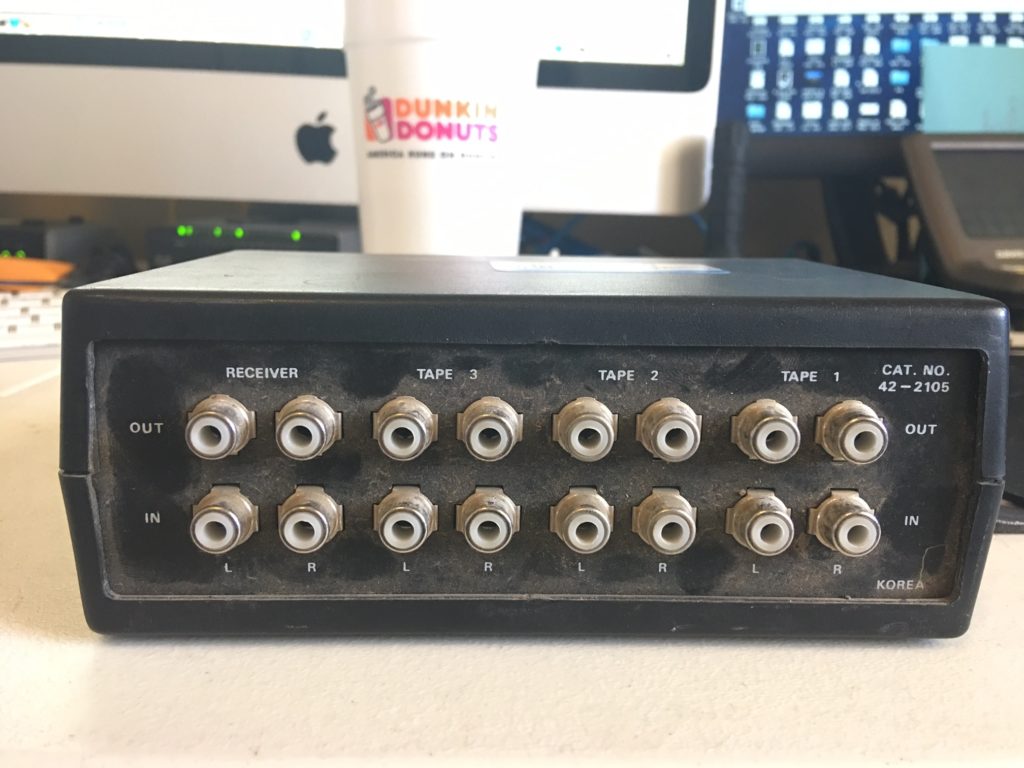 Yeah, dusty, I have not cleaned it up yet – I just got it home!

It even included a sticker on the bottom of the box of the name of the previous owner – who may even be a ham – (or a silent key, as most of the materials from Goodwill comes from donations.)  I will have to research it – if it is a local ham – send him a link to this post to know his old gear is back in service.   A google search even landed me the original manual including schematic… (Do they even include those anymore?)

Needless to say, I am excited to get this in use.   I took some time today to play with porting LSB audio out of the FT1200 on 80 meters, while I listened to the melodic tones of JT65 transmissions on 20 meters from the FT857.  I was able to port the audio to different ears and both ears at the same time, as well as break out just one signal in one ear or both ears at the same time.  Some cable management, some ferrite cores on the cables to reduce any audio interference from transmitters and I should be good to go.

Next up is how to wire up the headset mic to select between the two radios.  N1GY seems to have a solid handle on this already with his mic switch box.   Nice, considering I even have the same darn box he used taking up space in my shack “junk drawer”.