On March 31, 2018, I was lucky enough to visit and operate from the  80′ discone antenna built by Collins Radio Company at the Titan Missile Museum in Green Valley, Arizona.

The Titan Missile Museum, also known as Air Force Facility Missile Site 8 or as Titan II ICBM Site 571-7, is a former ICBM missile site located at 1580 West Duval Mine Road, Sahuarita, Arizona in the United States. It is located about 40 km (25 mi) south of Tucson on I-19. It is now a museum run by the nonprofit Arizona Aerospace Foundation and includes an inert Titan II intercontinental ballistic missile in the silo, as well as the original launch facilities.

The discone antenna is available for use by the general ham community any time that the museum is open for public use.  It is a very large, broadband antenna with low SWR from 80m – 10m.  (We tried 160m but it had a very high SWR)  The Green Valley ARC goes a great job of providing service to the antenna. The directions on how to use the antenna are listed here.

Dave, AC7FF, Christi, KG7NAD, and myself planned on attending the Tuscon Spring Hamfest that morning, a good local Tuscon hamfest which tends to attract a lot of classic radio gear and a few good deals if you are willing to hunt for them.   Our plan was to arrive early, attend the fest, then leave by 9AM to head down to the missile museum to get on the discone antenna.  One of the rules of using the discone is that it is “first come first served” and there is no “time limit”  If you wanted to operate all day, you could.  While that behavior doesn’t really support the friendly nature of the ham community if others are waiting to use the antenna – it does lend to the notion of – “if you want to use the antenna, get there first”.   That was our plan and on our minds as we headed south from Tuscon on I-19 towards Green Valley – we were banking on the fact that it was a hamfest day and the day before Easter – so attendance at the discone would be low and we would be able to get on the air. 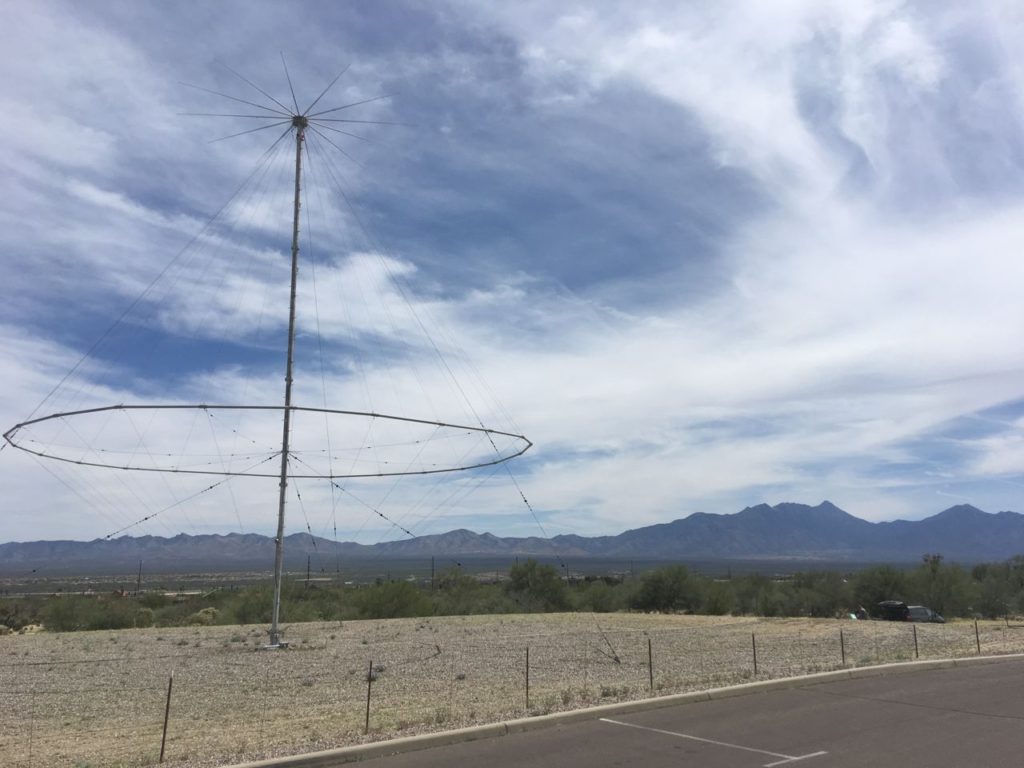 The discone as seen from the entrance to the Titan Missile Museum.  You can see the car and operating position in the lower right of the image.  This antenna is BIG!

When we pulled into the museum parking lot we immediately noticed that no one was using the antenna!  Wahoo!  No waiting!   We quickly formulated a plan and dropped Christi off at the museum entrance while Dave and I headed down to the parking lot so we could park and start to setup to use the discone. 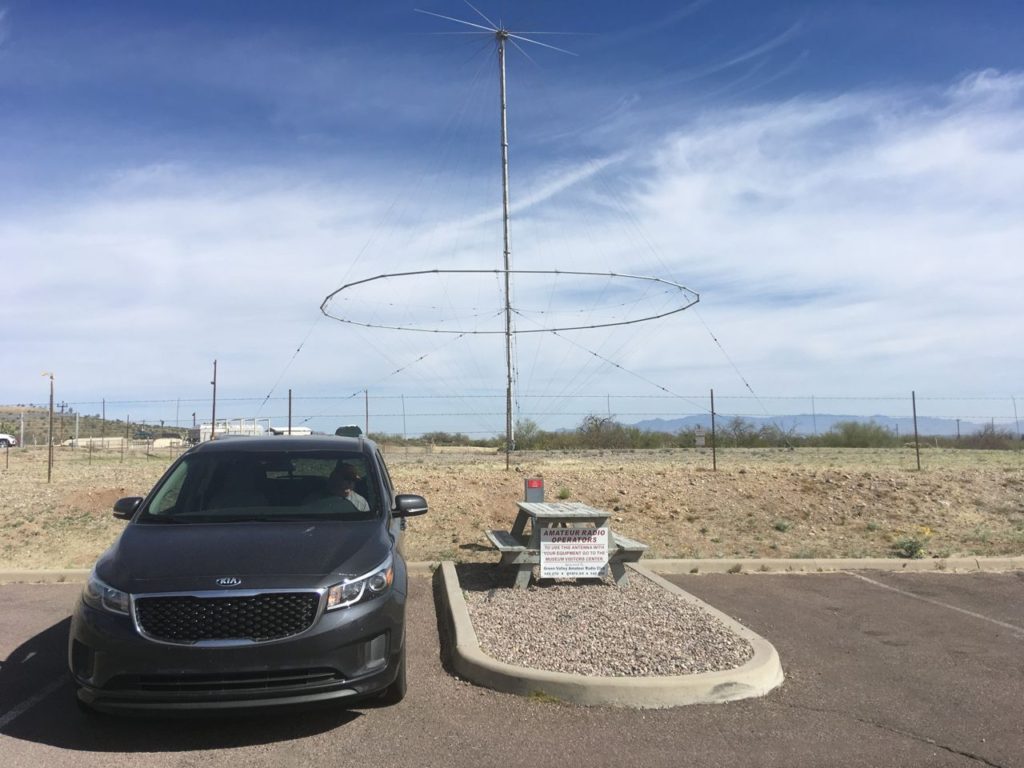 The coax for use with the antenna is neatly rolled up in the panel box at the rear of the end of the picnic table. 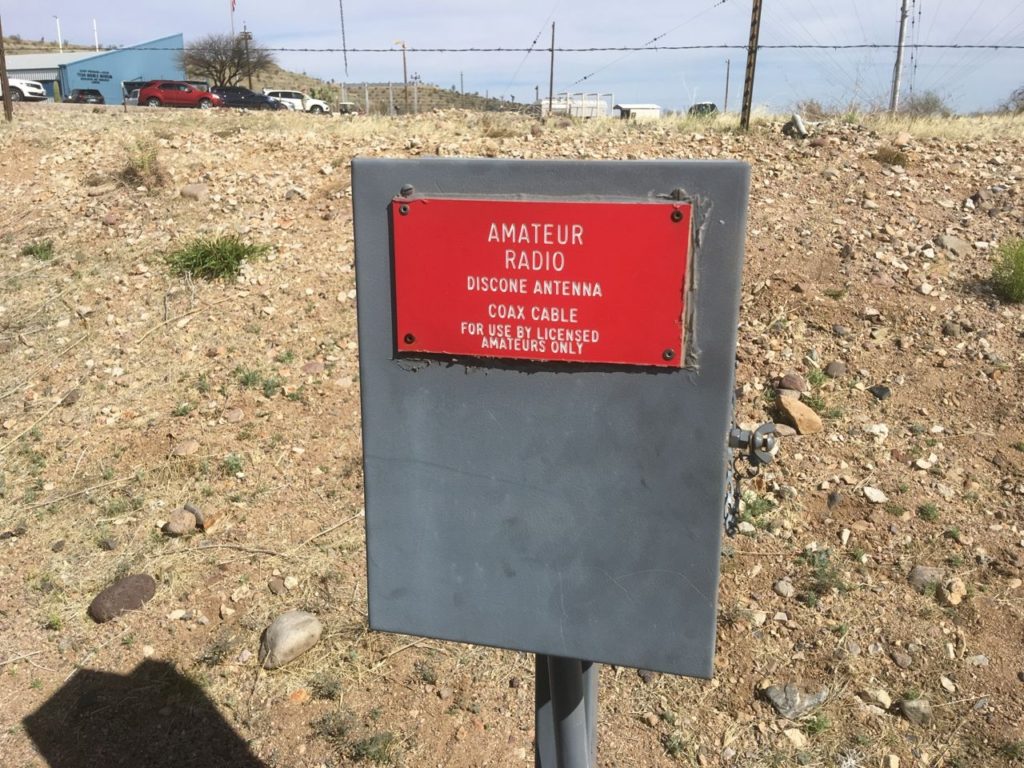 About 15′ of coax is rolled up in this box to connect to the discone antenna.

Soon Christi was back having signed up and we started to operate on 20 meters, (14.290 Mhz).  Dave connected his ft-857 to the coax pulled out his 36Ah battery box, connected the radio to power and tested the SWR on 20 meters.   It was very low, around 1.2:1 or 1.3:1.  Dave cranked up the power to 100W and we were off and running calling CQ “from the Titan Missile Museum Discone antenna!”. 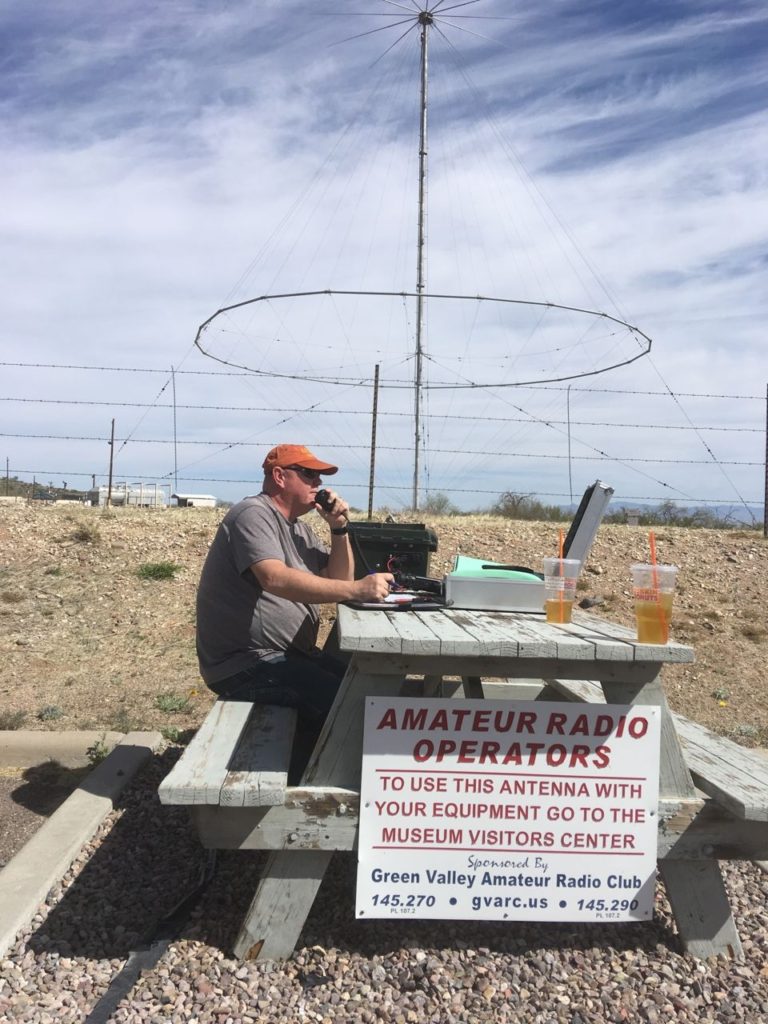 When we made our first operator switch, after about 10 minutes- Dave logged into a DX cluster on his phone to “spot” us, so other hams could see that we were active from the Titan Missile Museum.  I worked several stations then handed off the mic to Christi, who was giddy with anticipation and the excitement of being able to operate on the antenna.

Then the pileups began.  It did not hurt that we had the trifecta of:

That was a winning combination.   We started working folks at a rate of 2-3 per minute.  It got to the point that logging the stations was what slowing down the rate of QSOs – so Dave and I started logging for Christi as she worked stations so we could keep up with all the callers calling – sometimes 3 and 4 stations deep.  We would copy the call of the calling station and then a partial of the next one, so she could jump from one right to another without having to call CQ.  All the while mentioning hams should “Google the Titan Missile Museum for more information and pictures” of where we were operating from.

When Christi got tired we switched out again and Dave took over the mic and I logged for Dave.   At this point I was SERIOUSLY missing computer logging as we were copying everything down by hand.   Poor handwriting, sweaty hands and paper and a feverish pace of working stations all added to my mental notes for next time.  BRING LOGGING COMPUTER NEXT TIME.  (also bring and apply sun screen!) 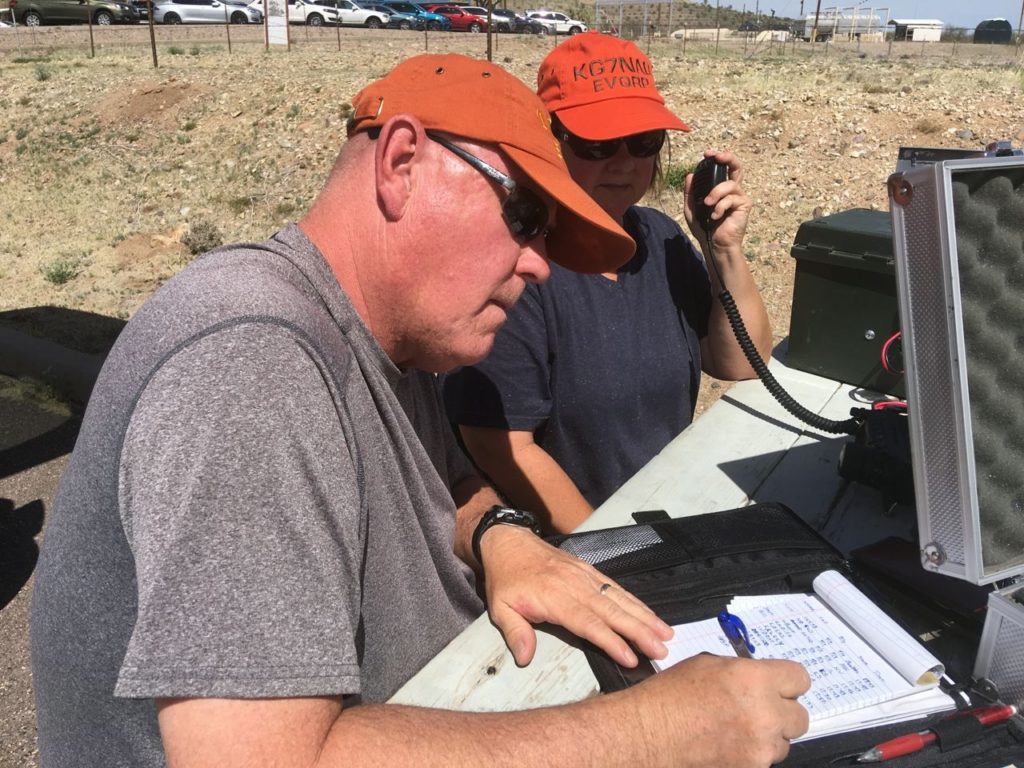 We operated for about 2.5 hours at the discone, switching out operators every 15 to 20 min.  I cut my rotations short so Christi and Dave could get more operating time.  After a few hours, 20m seemed to dry up, so we moved to 17m hoping to snag some DX.  Dave found an older ham who was calling CQ and spent over 15 minutes going back and forth with him trying to work a station in Aruba.  We could hear him 54 to 59 with fading on each transmission.  On the other hand, he had a lot of noise and was only pulling our signal out on QSB peaks.  It took many many minutes of back and forth in order for him to get a partial of our call, then full calls.  If nothing else, it was a good exercise for Dave on getting his call across.  I was surprised the DX stayed with us for as long as he did.  He didn’t have any idea that we were at the Titan Missile Museum or operating on the discone, just that we were weak – and trying to work him.   Dave promptly send him an email after the very abbreviated QSO with pics of where we were.

Working a retiree from the Airforce who was stationed at one of the Titan Missile stations.  He rattled off a lot of information about his experiences and thanked us for keeping the “memory alive” of this very important part in our history.  We promptly thanked him for his service.

Working dozens of stations in Texas

A station from Africa who was operating remote from California

And last but not least, a member of the Green Valley ARC, who resides about 7 miles from the discone.  It was neat to be able to thank them in person for keeping such a resource available for others to use.

It was a great time.  I am looking forward to going again and bringing some additional gear (triplexer) so we could operate separate radios on 15m and 20m (and 10m if it was open) at the same time from the same antenna.

Thanks Dave for driving – and thanks Christi for coming down with us. It was a super fun time! 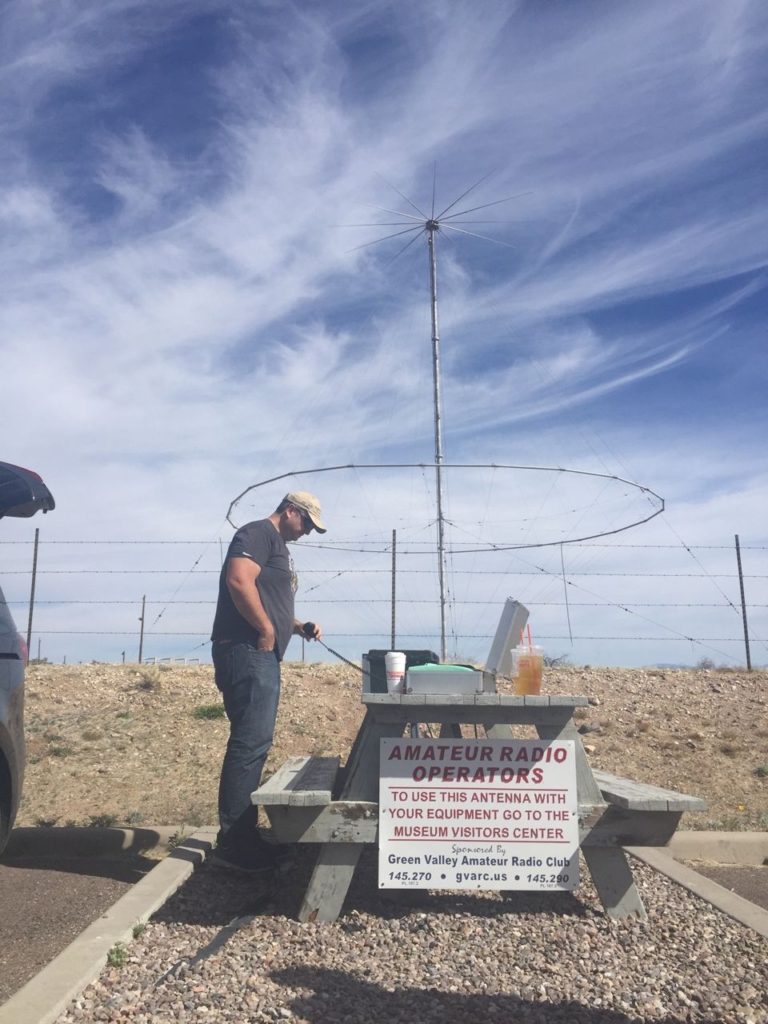 I was tired of sitting so operated standing for a while.. or at least as long as I had coffee.