Well I did it.
I managed to trip the safety breaker on the input side of my solar charger! I was super stoked!  My charger can handle 30 amps (input from the panels) so I have a 30 amp breaker right before the charger, as I rather reset a breaker then release the magic smoke out of a $150 solar charger.

Well, I know many of you who can do quick math are saying..

“No wonder you tripped it.. you math says that would happen”

However, that is IDEAL conditions.  What I have found is that when I run my solar panels flat mounted on the roof, they loose a lot of efficiency.   My experimentation shows that at most I get about 18 amps out of the flat mount panels (420W) that should, in theory deliver about 26 amps.

The magic happened when I added (or rather forgot) about the two – 100W panels that I had mounted on at an angle earlier in the day that were ground mounted.  Those were bringing about 10.5 amps total into the system, on top of the roof top system.

Needless to say, during the weekend in the middle of the day I took at look at the Trimetric meter and it was showing that I was drawing negative amps, meaning I was drawing OFF the battery, during a sunny day.. That dog don’t hunt. 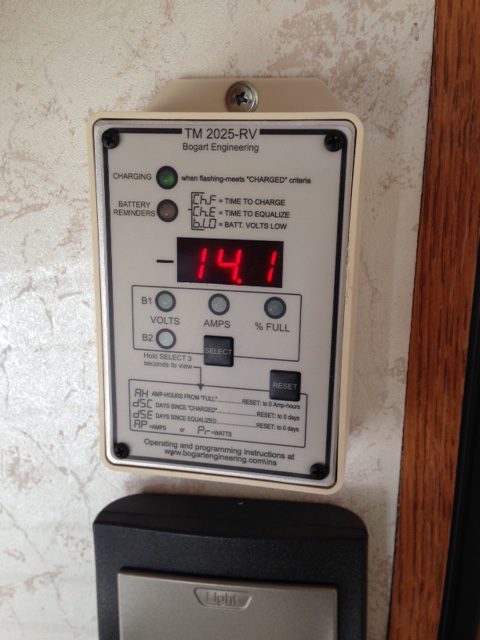 In this image the meter is showing positive 14.1V, topping off the batteries in the RV, which are at 99% full.

A quick check of the system showed me the popped breaker. 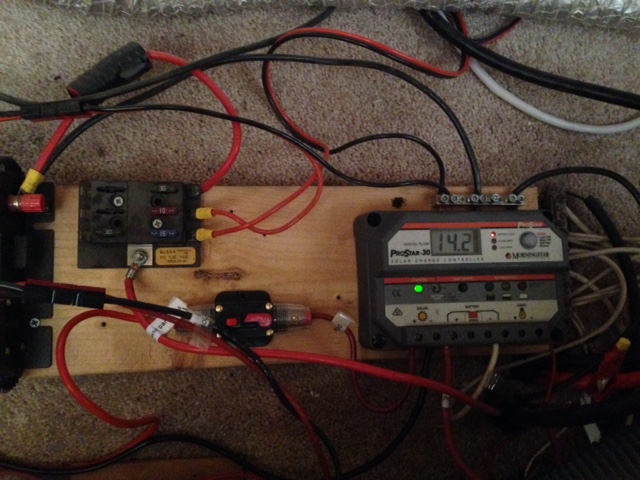 The ProStar 30 amp controller (with meter). Yes, I am not an electrical engineer, that is a rats nest of wiring that I need to straighten up. 30 amp circuit breaker is to the left of the meter.

COOL!
I went outside, took one of the panels off line, and then reset the breaker.  I watched the meter climb back up to 22 amps of solar power goodness coming back into my battery bank.  Big time smiles on my face.

Science is cool.  When it works for you – even cooler.

1296 EME… The start of something super cool